How Western Sydney Airport will impact the local jobs market

The long-awaited Western Sydney airport is finally under construction. Slated for completion in 2026, the project was first put forward a few years ago and now promises a major impact on the Western Sydney jobs market.

Once operational, the international airport will accommodate 10 million passengers per year and be a thriving hub for commercial partners, contractors and the local workforce. It is expected to result in thousands of newly created jobs to support the region’s fast-growing population.

Here are some of the ways we anticipate the airport changing the Western Sydney jobs market in the years to come.

Jobs in the construction phase

According to the Australian government, which is injecting $5.3 billion into building the airport, more than 11,000 jobs are being created – with 4,400 of those in the construction sector.

Manufacturing accounts for around 1,200 additional jobs, while just over 1,000 retail jobs are needed to support the construction efforts and workers on site. Professional, administrative, transport and warehousing and financial jobs also comprise more than 2,000 employment opportunities.

In addition, there will be a continued need for construction jobs at the airport even after it initially becomes operational. Continual expansion of the airport will mean that construction workers will be needed on-site to help meet the demands of the growing airport.

When the airport is built, the long-lasting changes to the industry in the region will begin. It is likely to become a huge centre for distribution, taking the freight load off Sydney Airport and functioning as a transport and business hub for not only Western Sydney but also Canberra, Wollongong, the Blue Mountains and Western NSW.

The airport is predicted to support around 28,000 direct and indirect jobs by 2031, which will increase to nearly 48,000 by 2041. This includes 5,600 jobs in manufacturing, 6,450 in retail and 5,600 in professional, scientific and technical services. This growth will drive significant employment opportunities for the Western Sydney workforce.

Everyone from security staff to retail workers and management to air traffic control will be required to service and maintain the new airport and its shops, hospitality facilities, storage and distribution channels and infrastructure – creating demand in an area with historically lower employment opportunities than in the more central Sydney hubs. 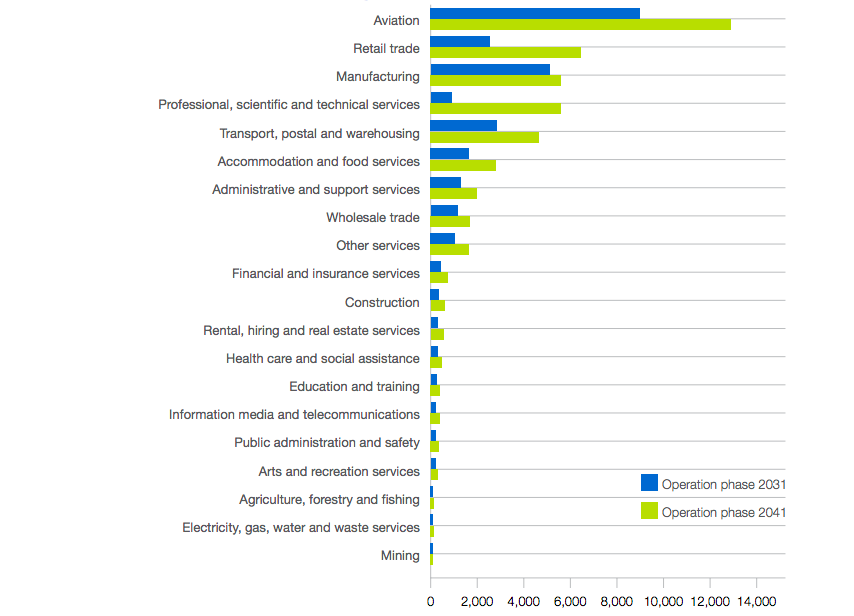 Beyond the airport itself, the area will become more attractive and viable for people and businesses to operate out of, encouraging investment and creating opportunities for locals, and lessening the strain on the existing infrastructure in the inner Sydney region.

This is a huge injection into the Western Sydney economy – which is already Australia’s third-largest economy and contributes $104 billion to the country’s gross domestic product. Exciting developments will undoubtedly take place as the project nears completion, significantly transforming the jobs landscape across Western Sydney.

Michael Page are the Western Sydney jobs experts. If you’re looking for a job in Western Sydney, start here or get in touch with one of our consultants.

the Michael Page team
Join over 60,000 readers!
Receive free advice to help give you a competitive edge in your career.