Future of Human Resources: How to help your people through the workforce of the future

As the fourth part of our story series looking at the Future of Human Resources, we speak to someone whose company has been carefully studying the workforce of the future, to give us a sense of how we can prepare personally – and future-proof our teams – for the pathways ahead to 2030.

If you met Philip Otley, you might forgive him for having one eye on you and one on the horizon. Now the founder of a consultancy called Growth Accelerator, and until recently a Digital Services partner with PwC, Otley has 25 years of brand and commercial strategy consulting experience – with specialties in the technology and digital spheres. He has also spent significant time in recent years delving into the future of work as we know it, thanks in part to PwC’s impressive report, The Workplace of the Future, which looked closely about the “competing forces” shaping the future of work to 2030. Specifically, the report addressed how we should adjust today's priorities to help improve tomorrow’s work landscape. He shared these insights with PageGroup.

According to Otley, between now and 2030, human resource leaders and C-Suite executives worldwide will be engaged in a process of skills matching – deciding on behalf of their companies exactly which roles traditionally taken up by people will be automated, and which will remain with us. “Every job that’s out there now, you can break down into stuff that people do really well, and in the conceivable future will be better done by machines,” he says. What skillsets or qualities will stay strongly in the human camp? Otley is clear in his answer. “Where there is judgement, creativity, lateral thinking and dealing with ambiguity, there is stuff there that people and their physical brains, are better than the foreseeable generation of machines.”

2. Machines and AI to tackle the biggest data tasks

The key to a successful transition of skillsets to automation is to accept that we will soon use the assistance of greater levels of machine intelligence: which will in turn help us to delve deeper into the supplies of data at our fingertips. “There are elements that you would hope that machines would be better than people at doing – and all indications are that this is going to be the case in the very near future.” These functions include mechanical tasks, and the processing of huge amounts of data for creating and recognising patterns, he says.

As the strategist notes, future leaders will more frequently need to explore transitioning their talent resources toward newer and more people-relevant functions. “Jobs will morph: and the elements that are done better by machines will either be automated or augmented,” he explains. Crucially, this will not be all one-way traffic: “The rather over-dramatic forecasts that around 40% of all jobs will disappear, covers only part of the story.” Otley says such forecasts ignore the new roles created to answer the prevailing problems of the day. “There will also be new jobs likely to be created that are far more skewed towards those elements like creativity, imagination, collaboration and empathy – and are currently really hard for machines to do.”

4. Big decisions lie ahead for companies

Key to the Workplace of the Future lies a series of possible “worlds”. Labelled by colour (red, blue green and yellow), the scenarios paint very different pictures based on decisions made now by politicians and leaders, and depending on variables like innovation or openness to change. “There are multiple plausible scenarios, largely influenced by the decisions we take now, which could end up with us having more jobs, or dramatically fewer jobs,” says Otley. “That’s one of the reasons for getting on the front foot, and having this discussion.”

As the business transformation process deepens, Otley says that companies will invariably go through an internal process of “injesting” each of their current job descriptions. This would see each role broken into its component parts – to help planners better understand which elements will likely be automated. This process will likely see multiple adoption waves, while the timing even within a single company will differ by geography. Eventually, the process becomes one of careful talent management. “You have this interesting discussion" ‘Okay, there’s a high probability that this job is going to be disrupted, and maybe 60% of the work currently in that job should be, over a period of say five years, automated. In that case, what options are open to you?’”

As Otley notes, sensible and empathetic management of talent resources will be required, to move individuals across roles within a company, and into areas that better utilise their skillsets. “In the job neighbourhood, what are the jobs less likely to be disrupted that require a similar base-level of capabilities? Jobs that stretch across the ‘neighbourhood’ your team member is in, and whereby the person can add significantly more value than they are now,” he says. “That’s a very ‘foot-forward’ approach. It requires a bit of work, but it is treating the employee and the person as an asset,” he notes. “And it’s not assuming that there’s a cookie-cutter person that can’t change.”

Company culture is built around the trust that individuals will be well-treated – then they in turn will perform to their optimal potential. As such, companies and brands must avoid knee-jerk reactions when sunset roles present themselves: as dramatic cuts in headcount will risk doing lasting damage to both the company and the individuals. “You lose a lot of organisational memory,” he notes. “And it costs you a lot to move people on.” Then of course, there's the human cost. “I don’t think it’s sustainable at a country level, and certainly lot at a societal level,” advises Otley. “You can’t just kick out the old, and help that a new cohort will magically turn up at your door.” 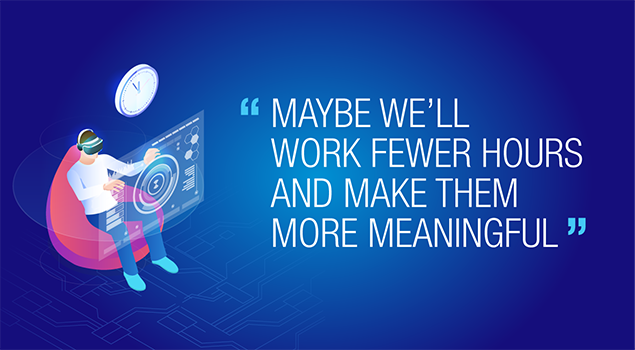 9. The office as a means of control may slip

Much has been made of the need for companies in the future to articulate a vision of lifetime learning – one which would see the combining of study functions and work functions in an average working day. Otley says this could also spell the end for another vestige of our corporate workplace: the traditional office, which in many cases closely resembles Don Draper’s mid-1960’s Mad Men era office. “There’s a whole bunch of forward-thinking companies saying that this model is not fit for purpose any more”, says Otley.

Already, finance institutions have started mixing up traditional office structures: doing away with hierarchies towards so-called “tribes” to solve problems within flatter stuctures. Elsewhere, numerous global agencies house their brands within hot-desked offices – helping to mix up talent and tasks more organically. “Hierarchical control does not work in the work environment, especially combined with the sort of outputs we want people to have.” says Otley. “If we want people to take greater responsibility for their outcomes, we have to give them the freedom to achieve them in ways that most make sense,” he stresses. “The case has already been made: it’s just a matter of when the majority of companies catch up.”

The bottom line of all these scenarios is that the workplace of the future need not be a depressing place. There is the possibility that being more focused on higher-order tasks, and having less control structures limiting our work, might in turn lead to workplaces as happier places.

“Certainly there are scenarios where that’s possible,” Otley concedes. “Everybody’s role has elements of fairly repetitive, non value-add drudgery. If we dial that down, maybe we’ll work fewer hours and make them more meaningful,” he says. “Certainly it’s a plausible scenario that work can become more enjoyable.”

As Otley summarises, for leaders and HR leaders alike, the future of our workplaces is still very much in our hands. “The point I’m making is that there’s no such thing as a pure path to the future. We get to create that by decisions we make now.”

Tackling mental health and wellbeing at the executive level
Scott Keller, Senior Partner at McKinsey refers to Steve Tappin's book called The Secrets of CEOs, which found 50% of…
8 min read
The Future of Sales: Advice for Job Seekers across Asia-Pacific
What should Sales professionals look for in future roles – and how can they embrace hot trends in this series to stand…
5 min read
The Future of Technology: Advice for Technology job seekers across Asi…
Land your dream job in Technology with these 6 pieces of advice from the experts.
6 min read
The Future of Technology: 8 key drivers of change for Tech in Asia-Pac…
This first article in a three part series on hiring trends in technology explores 8 drivers of change in the tech…
7 min read
People powered future: Why we all need to champion tomorrow’s talent
In the race for talent, taking a people approach in our technological age is even more paramount.
6 min read